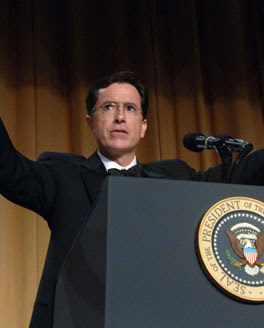 On Larry King a few nights ago, the ultimate badass that is Stephen Colbert announced that he is running for president of the United States in '08. Also, he is running as a Demoblican (Democrat and Republican) so that he can lose twice.

There is an unofficial Stephen Colbert for President 2008! website (found here) and, well, I don't know what to make of it. At first I thought he was joking, but now I am not so sure. If he ran, he'd get my vote. Why the hell not?
Posted by Bibi at Thursday, October 18, 2007