Baking the Blues Away

Sigh...not even my mother's nasty texts can defeat the sometimes omnipotence of depression. But the best thing I can do is try to do whatever I feel like doing to make me feel a little happier. Today, I decided to try baking something I've always wanted to bake - bread. Not just any ol' kinda bread, but some fucking badass bread for sandwiches or breakfast. So today, I am trying out a honey wheat bread recipe. Let's see how it goes.

First of all, these are pretty much all the ingredients I needed. Who knew there was an actual "bread flour" that you can use? Also, active dry yeast? Looks like tiny seeds and smells like beer. 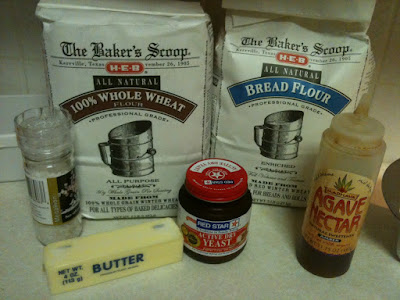 Okay, so I "stirred" in the fun stuff and now I have to let it sit for 30 minutes or until "bubbly". WTF does that even mean? This is what the first step looks like: 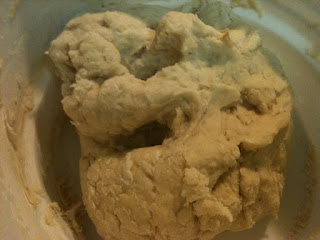 And about 20 minutes later, it still looks the same. 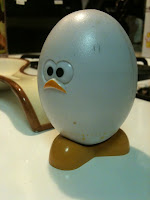 
Now, mixing in the wheat flour wasn't as fun as I thought it would be. First of all, you really can't use any mixing apparatus, since the best thing you can possibly use to knead and mix this shit are your hands. Good thing I got a shellac manicure two weekends ago. 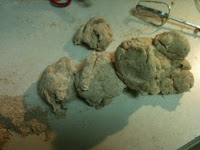 So after mixing the flour around, I noticed I didn't use as much as the recipe mentioned. In fact, a lot was left over. So this is what the dough things looked like after kneading: 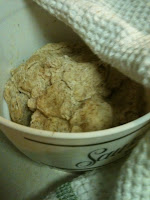 And then I let it sit in a greased bowl in a warm location so it can "double". Uh huh. I'm sure that shit is going to move at all. It needs to stay someplace warm - but see here, now that my AC got fixed this weekend, I am no where even thinking of complaining that there isn't a "warm" area to store this. Then - light bulb - garage. Improvisation station!

Now the recipe called for me to beat the dough. Like, beat it. Punch it. Okay, but see the dough hasn't done anything to me to make me mad at it and punch it! So I said a little prayer to the bread gods and punched away, thinking of a few things to help put a little more juice behind the beating. Then I placed in a loaf pan, left in the garage to "double" until it rises an inch above the pan. Uh huh.

At this point, I am very doubtful, but I place the dough in the loaf pan and placed it on top of the trunk of my car in the garage since thats the warmest place in the house. About an hour passes, and I go to check up on the bread - and whoa! 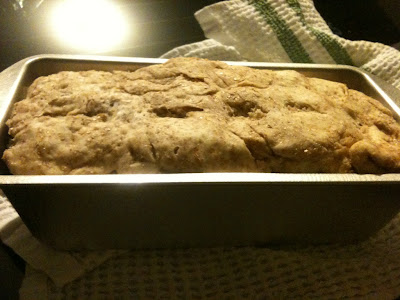 The dough actually doubled in size and it is almost an inch above the pan! So at this point I turned on the oven and decided to give the dough another 20 minutes or so.

Okay so 25 minutes pass, and here is my creation (after spreading some sugared butter on top of the loaf). It tasted...like bread. Maybe it needed salt, I don't know. But it looks pretty, doesn't it?? 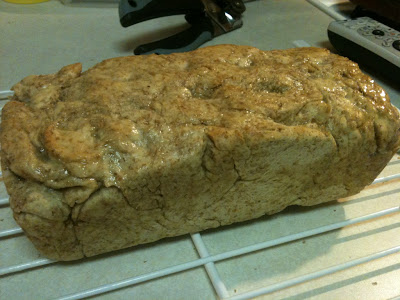 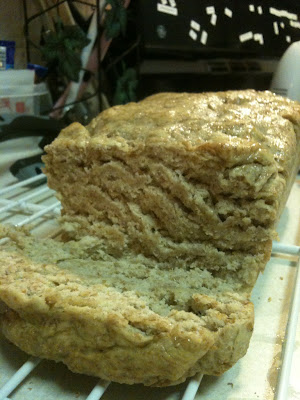 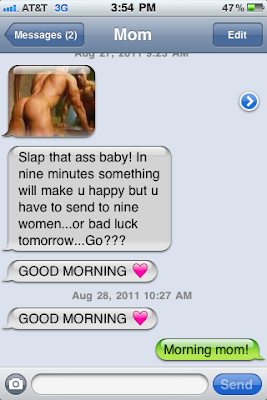 Hey, it's been a while since Mom has sent me something awesome. And she doesn't disappoint either!

The Tale of the Tiny Underwear 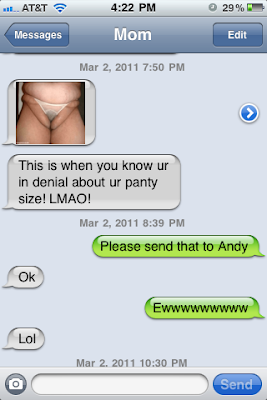 I'm sorry....I really am. This is probably one of the grossest and most disgusting pictures my mother has ever sent me. And of course, I tell her to send it to my cousin Andy because whom else besides us freaks would enjoy this picture than our cousin Andy.
Oh god, I can't believe I just post this. I will be back right after I finish bleaching my eyes out.
Posted by Bibi at Tuesday, July 05, 2011 No comments: 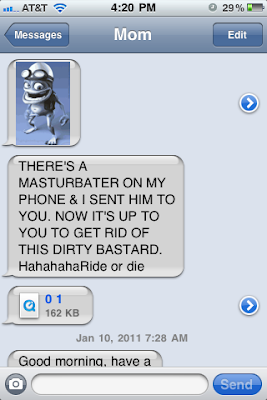 So how does one get rid of a masturbater on their phone? Do you just wait until it is done? Do you just....send it to someone else and it stops? And "Ride or Die?" Was this from one of her biker friends? So many questions that I don't want the answer to.

The sad part is that the little dude was animated. I spared you all the misery.

Too Hot for Corn 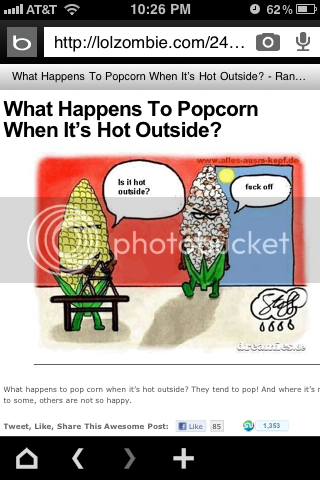 This one isn't as bad but it is kinda cute. Cute because its usually over 100 degrees where she lives.
Posted by Bibi at Tuesday, July 05, 2011 No comments: