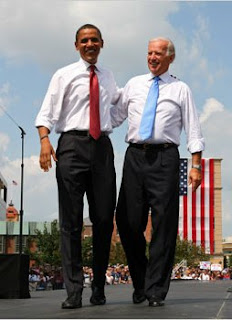 He's done it - he chose his VP - Joe Biden. Finally, someone to rip McCain the new asshole he deserves. Even though this wasn't the person I thought he would pick, it makes sense. He has what Obama "lacks" (according to McTaint) - experience, age, foreign policy know-how. I'm actually excited to see who McTaint picks now - it's gonna be tough to beat these two. Liberman? In my dreams!!!

And how about the speech he made? One of the things McTaint milks is the fact that he is a POW - now, I am NOT understating the importance and the courageousness of POWs everywhere, but Biden put it well when he said "These times require more than a good soldier. They require a wise leader." McTaint, if anything, was a good soldier and he defended this country, which is probably the only good thing I can say about it, and it is a VERY good thing. But these stabs he keeps making about Obama being a celebrity, a Paris-Hilton'esque persona - he is just making Obama out to be the dude that is going to win the "Most Popular" title in this election. Now we know why Obama has been quiet, laying in the shadows - he has Biden to give McTaint hell without compromising his reputation. Sneaky? Maybe. Smart? Yes.
Posted by Bibi at Monday, August 25, 2008